During the 1950s and 1960s, the art world saw the “seeds of discontent with Modernism, with a formalist aesthetic, and with the value systems that underpinned it” (Caicco 2019). As Harold Rosenberg came onto the art scene in the late 1940s, he challenged Greenberg’s framework, rejecting that the Abstract Expressionist artists of the New York School were an evolution or extension of European Modernism, and that art itself need not serve the purpose of pure aesthetic object.

Rosenberg defined the widely varied group of Abstract Expressionists artists by their “radical individuality” (Fineberg 2011, 34), which he proposed was a marker of their collective “American-ness” – the frontier spirit that gave them a bias to action, the tendency towards physicality in the creation process, “the individual overcoming space through self-initiated, self-motivated, and self-reliant activity” (Caicco 2019).

With the rejection of formalist tradition and principles and the de-aestheticization of art, the process of making art shifted away from a templatized, rigidly-defined technique for provoking an aesthetic emotional response and shifted towards a highly individualized and personal manifestation of art as a lived experience. Process in this period became artist-centric – instead of process focusing on a way to produce an end object for a viewer to receive, process became a way for artists to explore, decode and document their own experiences. 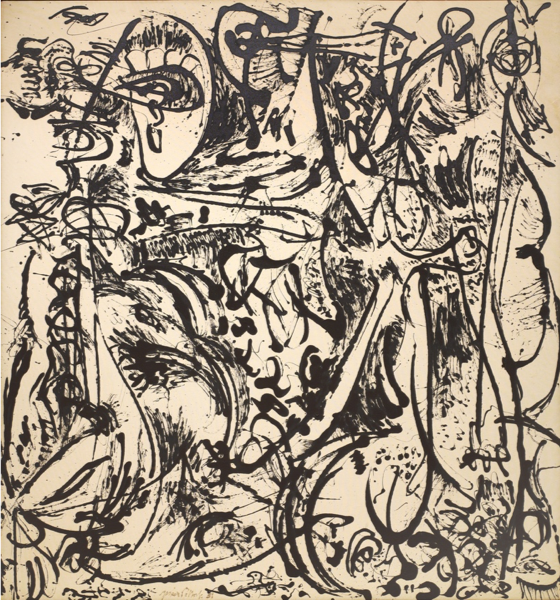 Jackson Pollock’s Echo: Number 25, 1951 is a painting of substantial size, roughly square (7’ 7 7/8” x 7’ 2”), enamel paint on unprimed canvas. The work was acquired by the Museum of Modern Art in New York through the Lillie P. Bliss Bequest (by exchange) and the Mr. and Mrs. David Rockefeller Fund.

Echo is a stark departure from Pollock’s usual style – immediately evident is the severe color palette. In contrast to his previous works, Pollock limited himself to black and white for this piece. Additionally, the motion of the paint on the canvas lacks the usual energy, it is less frenetic, less explosive than his earlier works. For this work, Pollock “poured the enamel paint onto unprimed canvas with a slowness and control that resulted in compositions characterized more by delicacy and economy than by explosive, radiating energy” (D’Augustine 2017). This slower, more deliberate technique allowed Pollock to explore more figurative imagery, as in the eye seen in the upper-left hand corner, something he’d abandoned very early on.

Pollock understood that this work (and associated series) were not likely to be received by critics, saying, “I’ve had a period of drawing on canvas in black—with some of my early images coming thru—think the non-objectivists will find them disturbing” (Museum of Modern Art. “Jackson Pollock, Echo: Number 25, 1951”). This demonstrates Pollock’s focus on himself at the center and sole beneficiary of the process of making art – his concern was not for the end viewer, but for what he felt, and how his experience of those feelings compelled him to work. And because his individual process was documentary, it is logical that as his experiences changed and shifted over time, the process by which he documented them and the objectified experience as the end work would reflect that.